It’s normal to binge on food when one feels hungry. But, what if the foods you are eating are leaving you hungrier than before? According to board-certified internist and weight-loss specialist Dr. Sue Decotiis, hunger is caused as a result of numerous intricate interactions that go on in the stomach, brain, pancreas, intestines and bloodstream. However, the concern is that this intricate circuit can be easily disrupted.

And, who’s the culprit? Some of your favorite foods. Below are mentioned eleven types of foods that will keep you starving even when you have filled your stomach:

White bread is prepared from white flour, which is obtained from the grain whose outer shell, also known as barn, has been removed. This in turns depletes the full-fiber content of the grain.

According to Decotiis, eating foods prepared from white flour increases your insulin levels. In one of the recent studies done in Spain, researchers surveyed the eating habits and weights of more than nine-thousand people. The results indicated that participants who consumed more than two servings of white bread every day were more vulnerable to become obese or overweight over a span of 5 years as compared to those who consumed less of it.

Dulan says it is normal to have a sweet tooth after binging on a bag of potato chips. Salty snacks, pretzels and chips are quick-digesting carbohydrates that can instantly increase your insulin levels only to have them rapidly drop afterwards. And, because your brain and taste buds relate quick-energy to sweet foods, it is common to crave sweet foods after snacking on salty chips.

Moreover, because of the phenomenon termed as sensory specific satiety, you can satisfy your salty stomach with a bag of chips. But, then you need to eat sweet foods to satisfy your sweet one. This way you eat double the amount of food says Dulan.

Just like white bread, white pasta is also one of those foods that leave you starving. It is fairly easy to cook it since so many people rely on white pasta for lunch and dinner. Although, a standard serving size of pasta is considered only half a cup of cooked pasta, most restaurants serve up to four cups of cooked pasta in a single serving.

When you eat large amounts of simple carbohydrates in one go, your pancreas start to overwork in order to produce more insulin. After a while, your body also secretes large amounts of sugar-managing hormone, which reduces your blood sugar levels and makes you hungry again.

Also, have you thought about the pasta sauce you are pouring over your pasta? If it’s store-bought, chances are that is overloaded with more amounts of hunger-causing sugar.

Mitzi Dulan, RD, author of The Pinterest Diet: How to Pin Your Way Thin says that juice is one of the favorite drinks of health conscious people. However, many of these so-called healthy drinks are only composed of sugar of fruits, but devoid of the skin and fiber containing pulp. This simply means that drinking a glass of juice can increase your sugar level and then decrease it again, just to make you hungry for a second time.

A healthier option is to prepare a smoothie using whole fruits and add a spoonful of protein powder or nut butter to make you full and balance your blood sugar levels as well.

Decotiis says that ingredients included in fast foods works to increase your hunger pangs. For example, trans fat contained in fast foods harms the gut and lessens your body’s ability to secrete more appetite-controlling neurotransmitters such as serotonin and dopamine.

Moreover, the gastrointestinal tract quickly absorbs the fructose corn syrup found in desserts, condiments and buns, which then increases your insulin levels and makes you hungrier. Also, salt contained in fast foods can dehydrate your body and cause symptoms that emulate those of hunger. When you feel dehydrated, your body may be easily fooled into thinking it’s hungry again.

A study published in Alcohol & Alcoholism indicated that just three servings of alcohol can reduce your levels of the hormone leptin, which works to curb hunger and keep you feeling full by thirty percent.

According to Decotiis, drinking alcohol is also responsible for diminishing your stored carbohydrate, glycogen; thus making you long for carbohydrates to reimburse for what was gone. Furthermore, loss of electrolytes and dehydration may make your crave for salty foods.

Decotiis says that it is just not possible to eat a single slice of pizza as you always want more. This mainly happens because your favorite pizza is prepared from white flour, processed cheeses, hydrogenated oils and preservatives that can increase your blood sugar levels and imbalance the secretion of satiety hormones and hormone-regulating regions of the brain.

If you really want to have the goodness of pizza, it is best to prepare it at home with whole- wheat dough and top it with lots of healthy vegetables, lean meat, and a sprinkling of cheese. This will turn out to be a perfect protein and fiber-filled meal that will not let you search for more food just after an hour.

According to the dietitian Susan M. Kleiner, RD, a scientific consultant with USANA Health Sciences, people intend to consume sushi rolls in order to get the nutrients of fish, but they end up eating more rice.

The California roll is composed of thirty grams of carbohydrates and consuming it means eating approximately three slices of white bread. Sushi rolls are quickly digested making your stomach empty because it is devoid of fiber or protein that makes you feeling full for hours.

MSG is one of the common flavor-enhancing additives popularly used in Chinese cuisines as well as in many other food products such as processed meats, beer, canned vegetables, soups and even ice creams.

One of the studies conducted by Spanish researchers found that this chemical causes an increase in hunger by up to forty percent. Furthermore, according to the study published in the journal Obesity, individuals who eat MSG frequently are likely to be three times more overweight than people who don’t consume MSG.

The morning starters for children that are prepared from white flour and loaded with table sugar may increase insulin and blood sugar levels. Dacotiis has found that consuming such a high carbohydrate food in the morning when cortisol levels are at their highest is a major blow to body’s metabolism.

Your body is naturally designed in a way to secrete large amounts of cortisol in the night and morning in order to prepare you for the stresses that come during the day. Dacotiis says that the large amounts of cortisol reduce your body’s ability to metabolize the consumed sugars. Thus, in spite of the fact that your blood sugar becomes high, it does not reach the tissues where it is required; thus, making you lethargic and hungry.

Cereals are a healthier way to start your day. Ensure to choose the ones that are prepared from bran or whole grain cereals and contain at least five grams of fiber and at most five grams of sugar per serving.

Aspartame, saccharine, and sucralose are a few of the artificial sweeteners that are commonly found in your coffee or diet soda.

Dacotiis says that such artificial sweeteners trigger your brain cells to believe that you are taking a sweet serving composed of calories, but then let them down. This in turn makes you hungrier and you crave more sweet foods throughout the day in order to compensate for the letdown.

- Previous article « A Vitamin That May Save Your Heart 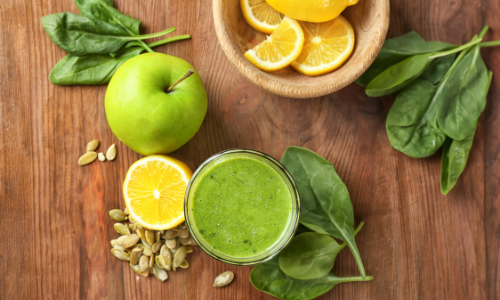 Next article - 5 Foods That Are Good For Your Skin »