New Evidence Shows You Can Live Longer with Low-Carb

How long do you want to live?

What if you could live long enough to meet your great-grandchildren?

More and more research is piling up suggesting that limiting calories from carbohydrates can prevent and reverse chronic disease and extend life-span.

Many new studies are challenging the established paradigm about the relationship between fat intake and the risk for heart disease and mortality.

There is an uprising of physicians, nutritionists, and researchers who are are suggesting that it is carbohydrates, not fat, that is the primary driver of cardiovascular disease, metabolic dysregulation, and chronic illness.

However, the mainstream paradigm is still entrenched in the low-fat dogma due to the economic interests of big food and big pharma.

A recent study published in the journal The Lancet was a large, epidemiological cohort study of more than 135,000 adults aged 35-70 years old. Individuals included were from 18 different countries across five continents.

What the researchers uncovered was an apparent association between consuming a low-fat diet and showing a significantly higher risk for mortality. Anticipating backlash from the mainstream scientific community, the study summary background begins with the statement that “the relationship between macronutrients and cardiovascular disease and mortality is controversial.”

The study design consisted of splitting participants into categories based on the percent of macronutrients that provided the most energy in their diet. The macronutrients considered were carbohydrates, fats, and proteins. The researchers then determined if there were any the associations between consumption of carbohydrate, total fat, and type of fat with risk of cardiovascular disease and total mortality.

At the conclusion of the study, the researchers determined that higher carbohydrate intake was linked to a higher risk of total mortality, but not cardiovascular disease-related mortality.

Interestingly, total fat consumption was linked to a lower risk of mortality. It also turned out that total fat consumption was not associated with cardiovascular disease, myocardial infarction, or cardiovascular disease mortality. What’s more, increased saturated fat intake was actually found to be associated with a lower risk of stroke!

And this is not the only recent study to vindicate a high-fat diet.

UC Davis School of Veterinary Medicine recently published a study in the September issue of the journal Cell Metabolism. The research was on mice who were fed a high-fat ketogenic diet. The results showed not only an increase in longevity but also a notable improvement in physical strength.

The senior author of the paper is nutritionist Jon Ramsey who has spent the last 20 years researching the mechanics of aging. Numerous studies have shown that calorie restriction can inhibit the aging process in animals, Ramsey wanted to investigate how aging was impacted by a high-fat ketogenic diet which in many ways mimics the fasting state.

Ketosis occurs when carbohydrate intake is restricted to the point that the body must begin burning fat for fuel.

According to Ramsey, “the results surprised me a little, we expected some differences, but I was impressed by the magnitude we observed — a 13 percent increase in median life span for the mice on a high fat vs high carb diet. In humans, that would be seven to 10 years. But equally important, those mice retained quality of health in later life.”

Get in The Keto Zone

We all want to live well in to old age and to maintain quality of life as we do so. As the evidence continues to accumulate it is becoming more and more apparent that a low-carb ketogenic diet is the best diet for anti-aging and disease prevention.

This is why Dr. Don Colbert wrote his latest book, The Keto Zone Diet. Years of research and clinical experience led Dr. Colbert to develop a diet plan that will help you will burn fat, optimize cognition, and improve energy levels. Learn more at www.KetoZone.com! 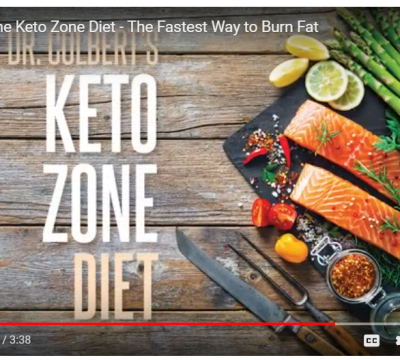 Next article - Avoid Alzheimer’s With This Brain Healthy Diet »