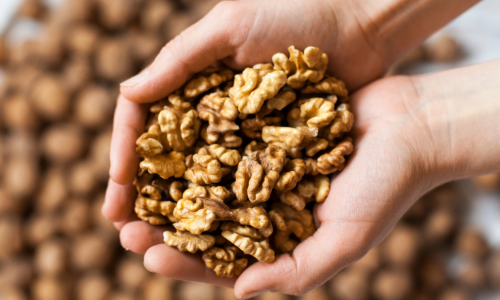 Medical researchers from the Yale-Griffin Prevention Research Center in Connecticut have found evidence suggesting that adding walnuts to one’s diet can protect against diabetes and heart disease in at-risk individuals.

For the study, a sample of 46 adults aged 30-75 were selected. Participants were all overweight and had excess abdominal fat. They had a Body Mass Index larger than 25, and a waist circumference exceeding 40 inches for men and 35 inches for women. All exhibited at least one of the following precursors of diabetes and heart disease. They either had high blood pressure, some level of insulin resistance, high triglyceride levels or high cholesterol. The group was randomly assigned to either a walnut enriched diet or a diet without walnuts. Those chosen for the walnut diet were instructed to consume 56 grams of shelled, unroasted English walnuts per day as a snack or with a meal. The study continued for 8 weeks.

“We know that improving diets tends to be hard, but adding a single food is easy,” explained Dr. David Katz, Director of the Yale-Griffin Prevention Research Center and lead author of the research team. “Our theory is that if a highly nutritious, satiating food like walnuts is added to the diet, there are dual benefits: the benefits of that nutrient rich addition and removal of the less nutritious foods.”

At various times during the 8 week period, participants underwent endothelial function testing. In other words, arterial flow velocity and artery diameters were analyzed to measure the overall ability of the arteries to constrict and expand with each heart beat. Endothelial function is increasingly being viewed as a prognostic marker of susceptibility to future cardiac events and the development of type 2 diabetes.

The research found that daily intake of 56 grams of walnuts improves endothelial function in overweight adults with excess abdominal fat. Furthermore, the addition of walnuts to the diet did not lead to further weight gain. “The primary outcome measure was the change in flow-mediated vasodilatation (FMD) of the brachial artery,” wrote the research group. “FMD improved significantly from baseline when subjects consumed a walnut-enriched diet as compared with the control diet. Beneficial trends in systolic blood pressure reduction were seen, and maintenance of the baseline anthropometric values was also observed.”

These results are in sync with other studies indicating that nuts can favorably alter levels of oxidative stress, inflammation and cholesterol, while also improving glucose metabolism and overall vascular functioning. Walnuts are a uniquely rich source of a-linolenic acid (ALA), and epidemiological studies suggest that plant derived ALA may confer particular cardiovascular benefits. A meta analysis investigating the impact of walnut consumption on blood lipids showed that walnut enriched diets significantly decreased total cholesterol as well as LDL cholesterol. Furthermore, walnuts are also rich in tocopherol, phenolic antioxidants, folic acid and magnesium – nutrients that have been shown to improve cardiovascular health.